A review of Perflurinated Ionomers 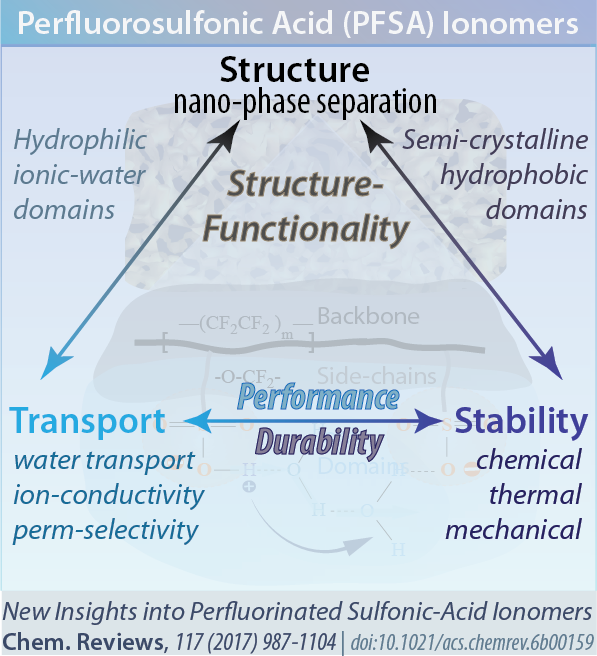 Although quite well investigated for decades, PFSA ionomers’ complex behavior, along with their key role in many emerging technologies, have presented significant scientific challenges but also helped create a unique cross-disciplinary research field to overcome such challenges. Research and progress on PFSAs, especially when considered with their applications, are at the forefront of bridging electrochemistry and polymer (physics), which have also opened up development of state-of-the-art in situ characterization techniques as well as multiphysics computation models.

Perfluorinated sulfonic-acid (PFSA) ionomers are members of a class of ion-conductive polymers known for their remarkable ion conductivity and chemical-mechanical stability. PFSAs are commonly used as the solid-electrolyte in electrochemical technologies, especially as the proton-exchange membrane (PEM) in polymer-electrolyte fuel cells (PEFCs) and the sodium-ion conductor in the chlor-alkali industry, which have been driving forces behind PFSA research since the 1970s, when the first commercial PFSA ionomer, Nafion was developed by DuPont.

Even after decades of research into alternate PEMs, Nafion still serves as the canonical solid electrolyte for most energy-storage and -conversion devices due to its inherent electrochemical functionalities of efficient ion and solvent transport in a chemically inert mechanically robust matrix that inhibits the transport of electrons and reactants/products.

Nafion is a random copolymer of polytetrafluoroethylene (PTFE) - a charge-neutral backbone - a side-chain with a pendant ionic group, SO3– (polysulfonyl fluoride vinyl ether) randomly tethered to the backbone. These (an)ionic groups fixed to the polymer is associated with a specific counterion (e.g., SO3– + H+ → SO3H) to maintain charge neutrality. In the presence of surrounding water molecules (from humid air or in liquid water), the highly polar nature of the sulfonic acid groups attract and absorb water molecules. Initial water molecules solvate the sulfonate group and form a hydration shell. Once the protons dissociate from the fixed anionic groups, they attach to the water molecules via hydrogen bonding thereby forming water-proton complexes (SO3H + H2O → SO3– + H+(H2O) ). It is these molecules that act as charge-carrier and provide the ionomer its proton transport capability. The dissimilar nature of the hydophobic backbone and hydrophilic ionic domains lead to a phase separation occuring at nanoscales, which is enhanced by hydration of the system with the addition of more water molecules. This phase-separated morphology that gives PFSAs their unique ion- and solvent-transport capabilities in a stable matrix, yet also makes it a challenge to characterize this structure in-situ (controlled hydration and temperature) and to understand the inter-relations among (nano)structure, hydration, transport and stability.

Thus, PFSAs are inherently multifunctional polymers with their transport and mechanical functionalities governed by their multi-scale morphology in the presence of ionic interactions. This morphology is dependent on the various interactions and balance between the mechanical (deformation) energy associated with the hydrophobic backbone and the chemical/entropic energy associated with hydration of the hydrophilic ionic groups their side chains. This balance is controlled and impacted by wide range of environmental and material parameters that govern the structure/property relationship of PFSAs, as summarized in below (Figure). 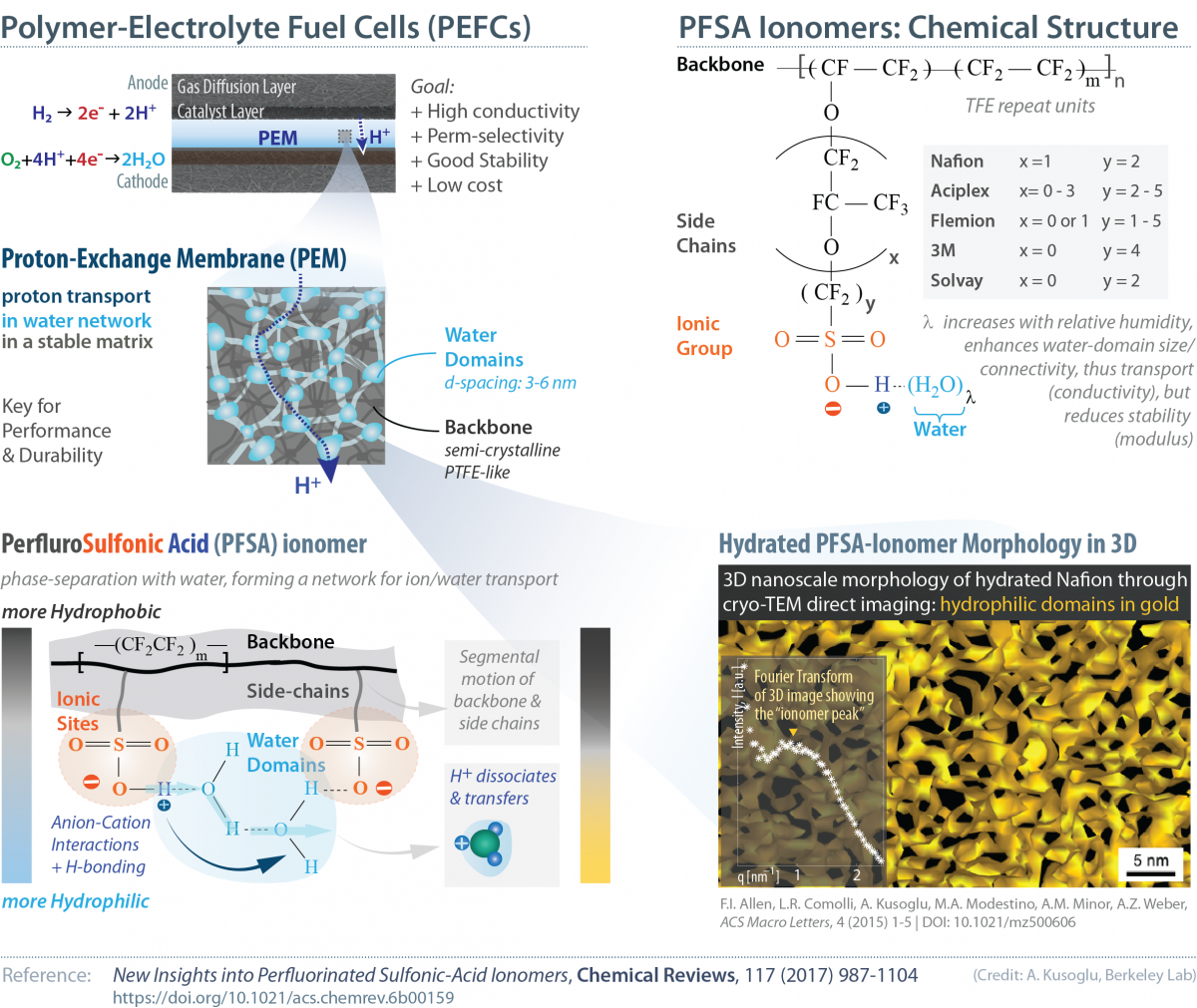