Ionomers are ion-containing polymers where the ionic groups are covalently bonded to the polymers’ backbone. These ionics groups are neutralized by mobile ions of opposite charge (counter-ions), which gives an ionomer its ion-conductive properties, a critical functionality for transporting ions in solid-electrolyte membranes.
Our research involves structural characterization and modeling of transport and mechanical properties of various ion-conductive polymers and composites to establish structure/function relationships and develop design guidelines.

A common use of solid-electrolyte membrane in energy technologies is proton-conduction, in which case the ionomer function as a proton-exchange membrane (PEM). The most widely used ionomer for PEM, especially in fuel-cells, is Perfluorosulfonic-acid (PFSA), due to its remarkable proton transport properties and chemical-mechanical stability. While the high proton conductivity of PFSA is attributed to its hydrophilic sulfonic-acid groups, and their hydration with water, the stability of this ionomer is imparted by its hyrophobic polytetrafluoroethylene (PTFE) backbone. Any factor that improves transport properties of an ionomer tend to undermine its stability, thereby creating a transport/stability trade-off. An active area of research is to understand how ionomer chemistry and environmental factors control the interplay between the transport and stability of the ionomers and to develop high-performance and durable materials for electrochemical energy devices.

PFSA ionomers are widely used as solid-electrolyte ion-exchange membranes in electrochemical devices, wherein their properties are impacted by the interactions among the anionic sulfonate groups, mobile counter-ions (cations), and hydration levels. Cation-form and humidity collectively affect the structure/transport-property relationship, yet their interplay is coupled through the water-cation interactions and phase-separated nanomorphology. In a recent paper, we studied water uptake and conductivity of cation-exchanged PFSA in both vapor and liquid water, and then correlated them with changes in mechanical properties and nanostructure (hydrophilic-domain spacing and phase-separation) to establish transport/stability relationships. 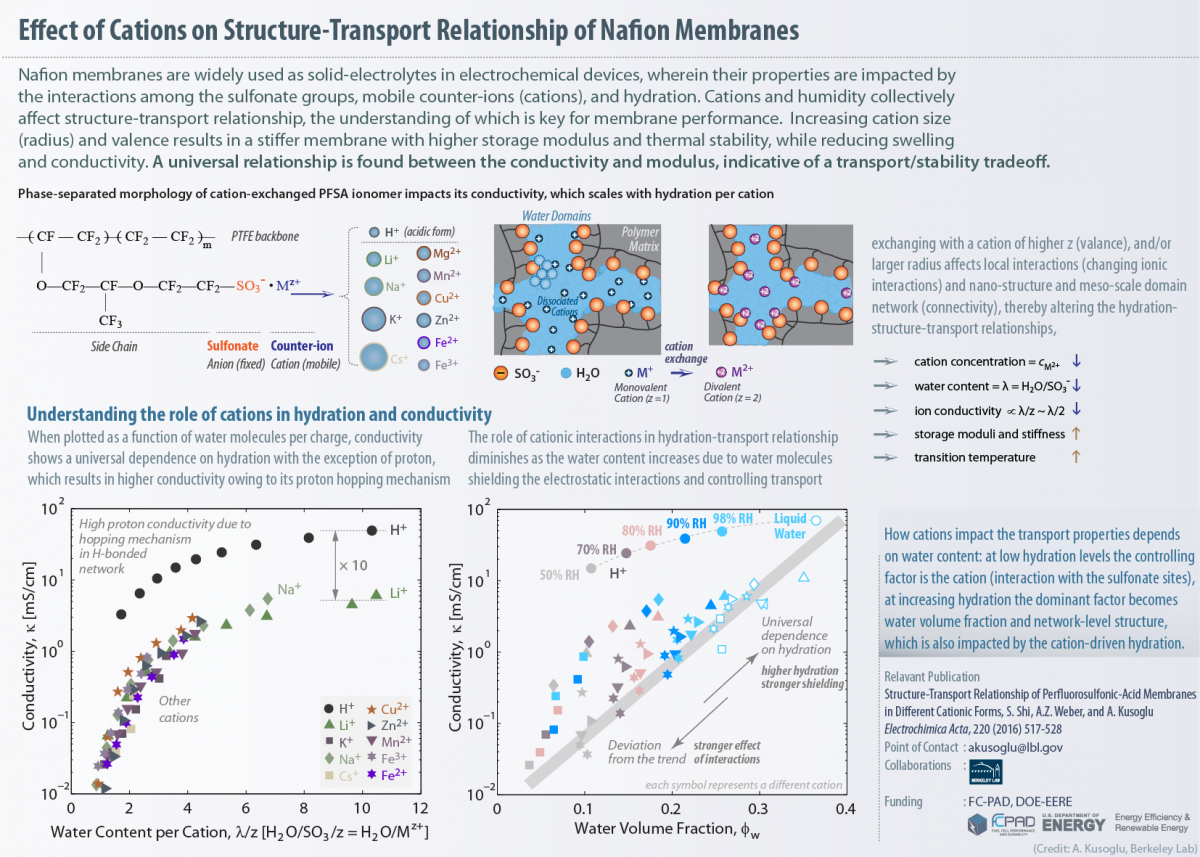 With increasing cation size (radius) and valence, the storage modulus increases, while the water uptake and conductivity decreases yielding a universal relationship indicative of a transport/stability tradeoff. The extent to which the cations impact the transport properties depends on the water content: at low hydration levels the controlling factor is the cation (and its interaction with the sulfonate sites), and with increasing hydration and in liquid water the dominant factor becomes water volume fraction, although it is also controlled by the cations. In liquid water, the conductivity scales with the water volume fraction, regardless of the cation type and valence. However, as the degree of hydration is reduced the conductivity data begins to deviate from this trend, where conductivity depends more on the cation’s interaction with the sulfonate group, and its dissociation, more so than the water content. Similarly, the decrease in hydrophilic domain spacing of PFSA exchanged with larger cations scales with cation radius at low water contents, but with Lewis acid strength (LAS) at higher hydration levels. Overall, it was found that, it is the water per charge, rather than the water per sulfonate group, that appears to govern the structure/transport relationship. 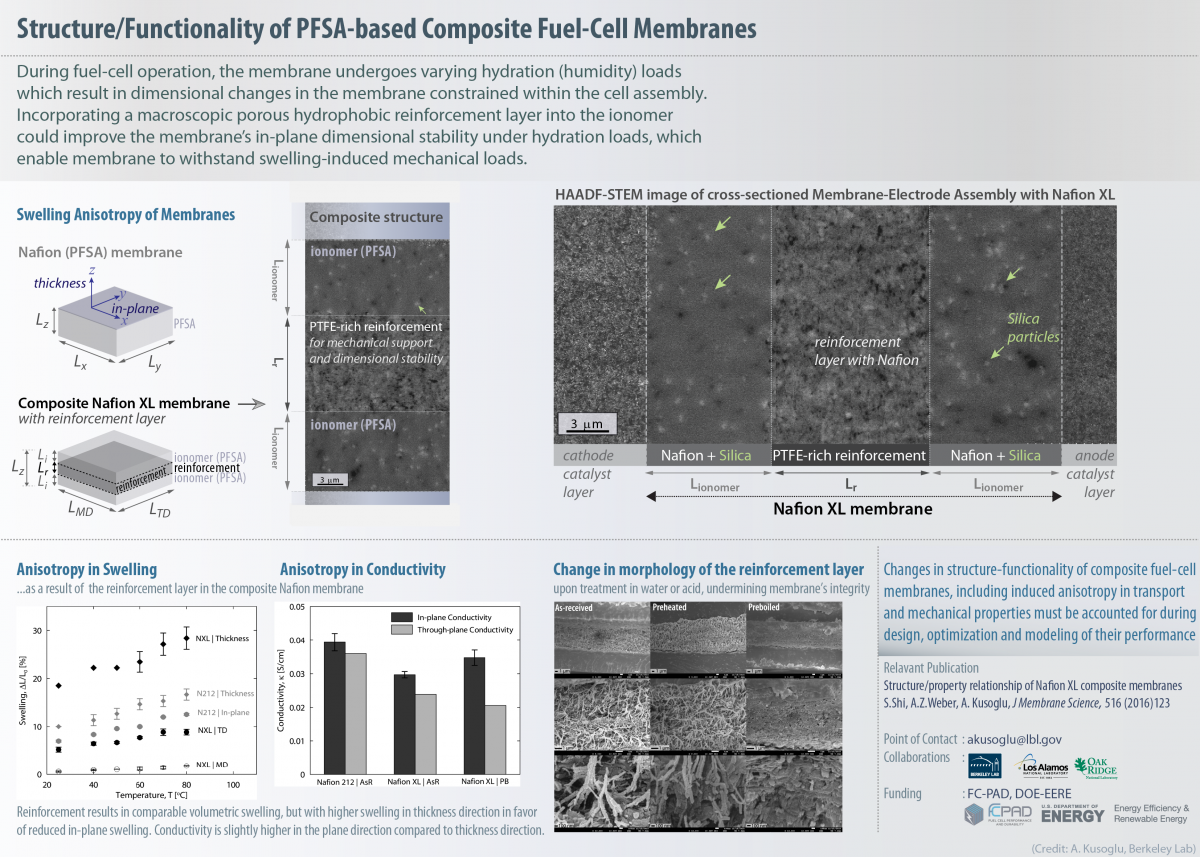 Our current work also involves structure-hydration and transport characterization of various anion-exchange membranes (AEM) for low-temperature electrolyzers and alkaline fuel cells. Our investigations include modeling and experimental characterization of the chemical and mechanical stability of AEMs, and identifying factors governing these membranes’ transport-stability trade-off. In a recent study, investigated poly(aryl piperidinium)-based on terphenyl (PAP-TP-85), an AEM with promising fuel cell performance and durability, and a commercial AEM), Fumasep FAA3. Membrane water uptake and anion conductivity in liquid and vapor water, as well as the impact of counter-anion forms on these properties, are investigated. Morphology of AEMs examined via small-angle X-ray scattering (SAXS) shows weak phase-separation, regardless of hydration level and anion type, which is attributed to the reduced chemical dissimilarity between the backbone and ionic moieties. Despite both AEMs' amorphous nanostructure, PAP-AEM has a higher ion conductivity than FAA3. Water content plays a more significant role than does temperature in controlling the anion conductivity in water vapor. In liquid water, normalized conductivity shows a universal dependence on hydration, regardless of the anion form. Moreover, in water vapor, conductivity is influenced more by ion mobility than ion concentration, and depends mainly on hydration. Thus, ion transport in disordered AEMs is governed primarily by hydration, in contrast to phase-separated ionomers, where ion transport is governed by nanostructure-hydration interplay. 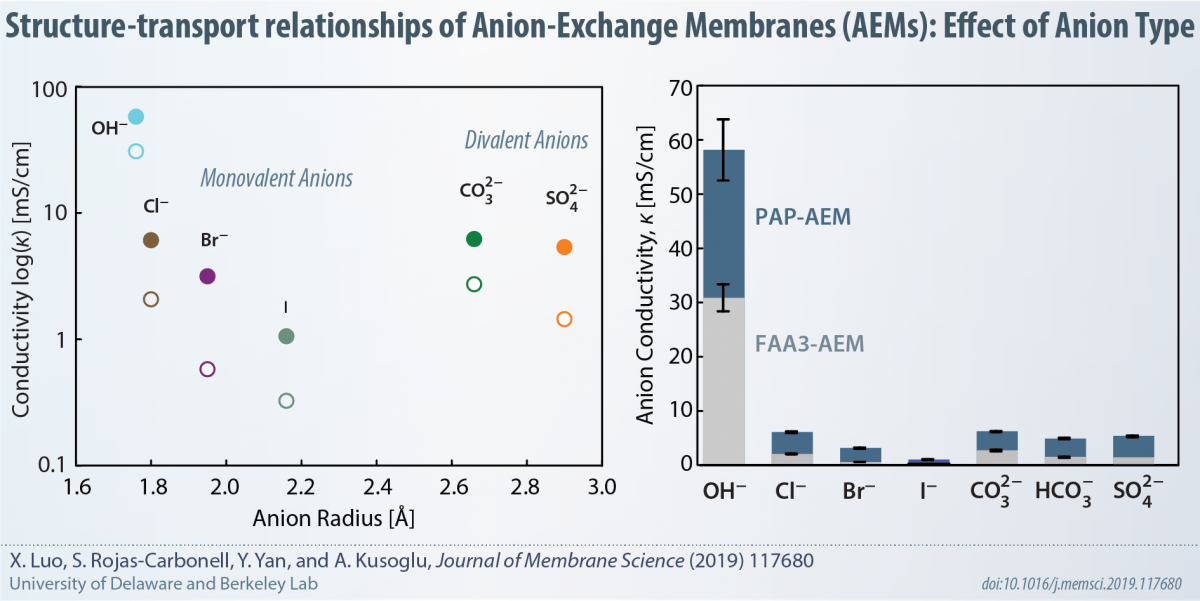